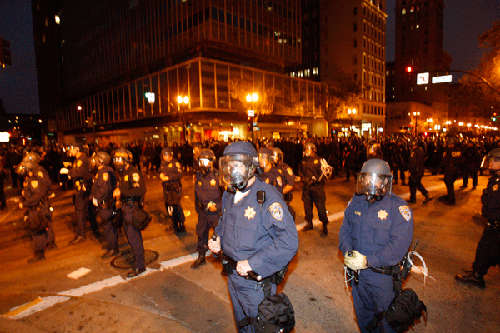 On a Wednesday morning last month, 70-year-old Heung Kim went out for a morning walk. By mid-morning that July 16 day, Kim’s husband Eun Hak Lee, 83, was a pedestrian fatality and Kim was fighting for her life at Highland Hospital in Oakland. Kim remains at the hospital in fair condition, a spokeswoman said Friday.
The couple, who had been visiting from South Korea for a month, were crossing High Street when a motorist ran them down.

More than 350 pedestrians are hit by vehicles in Oakland every year, according to the Oakland Pedestrian Safety Project. From 1995 to 1999, Oakland had the third highest rate of pedestrian fatalities per capita in the state, behind San Francisco and Berkeley.
This year, four pedestrians have been killed so far; last year, 15 were fatally struck.
Chinatown, with its poor traffic design, high concentration of elderly walkers and congested streets, is an especially dangerous place, pedestrian safety advocates say. Many elderly residents have been hit and killed there in the last few years.
The number of pedestrian deaths is cause for serious concern, but not all the news is bad, safety activists say.

Oakland is on the whole considered a very “walkable” city because traffic is relatively light due to so many residents taking buses or BART, they say. The city’s short blocks and grid layout also are conducive to walking.

It is also one of the few cities in the nation with a Pedestrian Master Plan, adopted by the City Council last year, said Diana Williams, executive director of Urban Ecology, an Oakland nonprofit working on the first-ever Walkable Streets Toolkit, due out this fall in English and Spanish.

“There are lots of manuals on how to redesign streets — more manuals than anyone will ever read. What is needed is a reader-friendly handbook that helps a range of audiences understand (the issue) of walkable streets,” Williams said. The handbook will include case studies of cutting-edge projects that are helping “calm” traffic in Oakland, including the pedestrian scramble at 8th and Webster streets in Chinatown. One University of California, Berkeley study found the Chinatown scramble has reduced close calls between motorists and pedestrians by 50 percent since it was installed last year.

The death of 83-year-old Hong Yee, fatally hit by a car in Chinatown two years ago, was partly responsible for the scramble — a traffic light timed to give pedestrians full access to intersections, allowing them to cross diagonally and horizontally without interruption.

Geared toward transit users, elderly people, youths, merchants and social justice advocates, the handbook also will include information on how to effectively champion for safer streets, how to reach the city public works staffers and what kinds of traffic solutions are used and not used, along with their costs.

The handbook will stress the importance of safety, but will also tout walking as a health benefit and a way to see new things and meet new people.

“The big issue we are trying to get people to understand is that walking isn’t only about getting from Point A to Point B,” Williams said. “Streets are the connective tissue of a community and the experience you have as you walk in your community — when you stop and get coffee and meet your neighbors — are all about quality of life” Urban Ecology officials also expect readership among motorists.