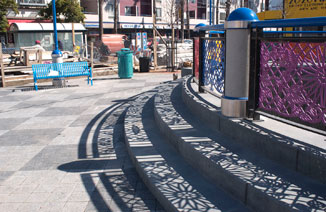 The 16th street BART plazas were redesigned in order to create a space which was safe and aesthetically enjoyable for community members of the Mission. Urban Ecology wanted to create a communal space in both the southwest and northeast plazas at the heavily used 16th street BART station. The community planning process began in the summer of 1997 and was completed six years later on May 17, 2003. 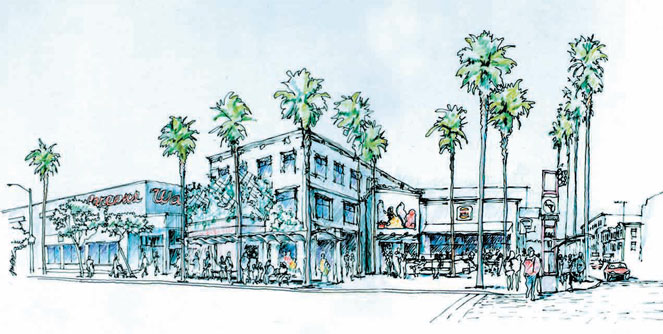 Under the MTC’s Transportation for Livable Communities (TLC) program and corresponding commitments from BART and SFCTA, Urban Ecology whished to design these plazas in order to address community concerns. Using multiple community based focus groups, Urban Ecology was able to hear the concerns of youth and individuals of the BART station and plan accordingly. The main concern of community members were the lack of safety, visual and physical barriers, and lack of identity or orientation.
16th Street BART Plazas nowadays

These plazas were originally a dull and uninviting landscape with a lack of trees, bland concrete walls, and steel fences surrounding the plazas. Urban Ecology sought to change this by providing a space which was colorful and inviting thus creating a greater atmosphere of community and identity for mission residents. Community members whish for the plazas to remove the original metal fencing, planter boxes, and walls around the station and entrance which made the station seem more exclusive, to have space for public art to add color, bike storage to promote alternative modes of transportation, more trees, and more seating space.

The southwest plaza was designated for public art. Murals and artistic tiles were added to give the space much more sense of culture. An intricate and colorful railing was put in surrounding the entrance to the station, creating a much more visually aesthetically pleasing space. Space was also provided for permitted vendors so sell art and food. The northeast plaza was given more trees seating place to create a much more positive and inviting atmosphere. In both plazas custom bus canopies were installed to reduce visual barriers. By using community involvement, Urban Ecology was able to create a space which is now widely used by pedestrians. These plazas are now safer and contribute to the cultural landscape which the Mission is known for.