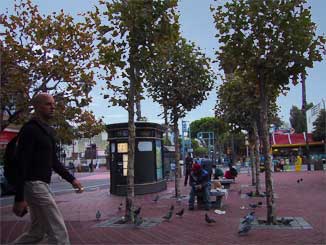 Starting in the fall of 2000, community members were actively trying to bring improvement to the 24th street BART station plazas in the Mission. In 2001 Urban Ecology in connection with community input, designed a plan which would improve the atmosphere of these plazas. The goal was to create a vibrant commercial corridor, with the plazas at the 16th and 24th street stations as the communal focal point.

Urban ecology held numerous community outreach workshops to facilitate the desire of the plaza functions. There was a concern for the uninviting presence of the station, the safety of the people, and the accommodations to the mass amounts of transit users. The residents wanted the plaza to represent a gateway into the artistic and cultural hub of San Francisco. Urban Ecology worked with the Mission Economic Development Association, The Planning Department of the City and Community of San Francisco, and the Metropolitan Transportation Commission’s Transportation for Livable Communities Program to design a culturally and economically thriving communal space. Before redesign, both plazas were surrounded by barriers of fences and trees giving an exclusive feeling, and surrounded by blank and colorless walls. The bus shelters were too small to accommodate the massive amount of transit users and there was not enough seating space. At night there is not enough light to give a safe feeling to people passing by the plaza. Three community workshops were held receiving over 100 community members, to finalize a design which met the concerns of the community. The fences were removed and more seating and trees were added to create a much more inviting atmosphere. Also, lighting was added making the plazas more safe and visible.