Petaluma River Coming Back to Life 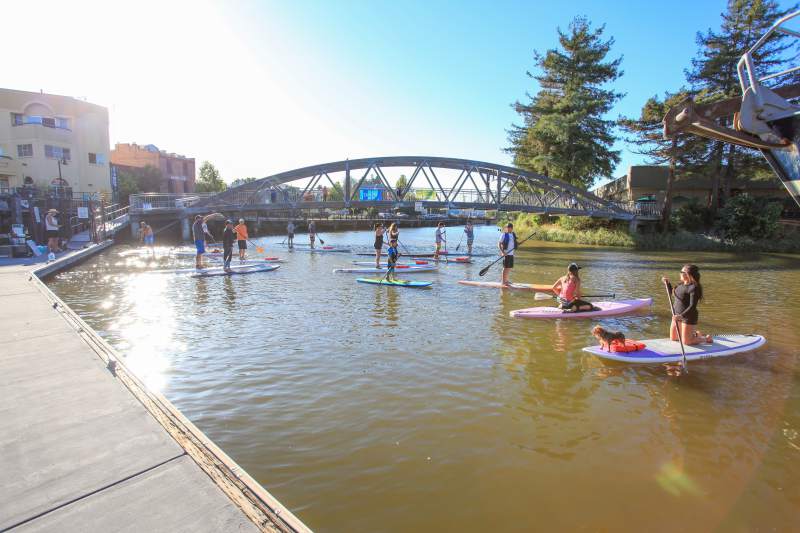 On a sunny day in October, forty members of Urban Ecology, Greenbelt Alliance, and local community activists toured downtown Petaluma and discussed the city’s plans for river development and revitalization in the city’s center. This North Bay city began as a shipping port on the Petaluma River, bringing harvests from the area’s fertile river valley to destinations throughout the Bay Area.

Completion of the Golden Gate Bridge in 1936 combined with post-World War II suburbanization catalyzed Petaluma’s transformation into a bedroom community. With this change, the city’s center of gravity shifted east toward Highway 101. Built in the 1950s, the highway replaced the river as the community’s primary corridor. In the 1960s, Petaluma’s population almost doubled-from 14,000 to nearly 25,000. In 1972, spurred by this rapid growth, Petaluma became the second American city to enact growth controls. Petaluma now has 50,000 residents and, in 1998, passed an urban growth boundary by a 79.6% majority.

Planning Director Hans Grunt told tour participants that an advisory committee was appointed by the city council in the mid-1990’s “to oversee the creation of a new specific plan to encourage infill in the city’s central area along the river-a quarter of which remains vacant or underused.” Using the 1996 River Enhancement and Access Plan and the 1987 General Plan as a springboard, the ROMA Design Group created a plan that capitalizes on the unique features of the central area and plans for contextual growth. The Central Petaluma Specific Plan envisions a reinvigorated central district in which diverse activities, including traditional industrial uses, are accommodated. The plan calls for opening the river for public access and enjoyment, and clustering housing and destinations in close proximity to the historic downtown, river, and future transit stops.

The tour visited sites that embody parts of the plan:

* The locally-owned Apple Box Cafe, where tour participants began the morning, is part of The Great Mill, built in 1903. The former grain mill now houses office space, a gym, and retail shops. The cafe’s outdoor seating models the plan’s call for directing all surrounding uses toward the river.

* The Golden Eagle Mall exemplifies the dominant pattern of development from the 1960s through the 1990s: auto-oriented, low density, and without acknowledgment of the river. The mall has become more successful since the construction of a pedestrian bridge to the historic downtown and reorientation of buildings towards the river. The plan calls for higher intensity use of this area.
* A vacant, dusty train barn is planned for renovation into an open air market with office space. Across the street, Petaluma’s historic train depot will be rehabilitated to accommodate local and regional buses and potential future passenger rail service. The plan also calls for the development of a mixed-use transit center, including offices, ground-level retail development, and housing.

* Located in the historic warehouse district with many industrial uses intact, Foundry Wharf is a rehabilitated stove factory which today houses offices and light industries in smaller new buildings overlooking the river. As General Manager Mary Neal pointed out to the group, Foundry Wharf has enhanced the district’s unique character.

As envisioned, full implementation of the Central Petaluma Specific Plan would result in over 400 new residential units at 20 to 40 units an acre, a cinema and hotel, 150,000 square feet of new stores and restaurants, and a million square feet of new office and employment uses. Similar to Suisun City in Solano County, the entire riverfront area will be connected by a pedestrian trail. With clear, broad-based support for the plan and excitement for the developments, UE is optimistic about the plan being approved by the City Council in early 2000.