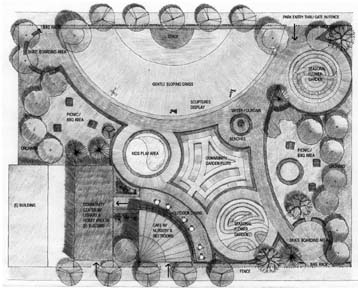 On April 5, Urban Ecology organized the third in a series of community workshops in Telegraph-Northgate, a low-income neighborhood that lies just north of downtown Oakland. Nearly three dozen residents and merchants gathered to review design recommendations developed by UE, based on community members’ visions of the location and types of development they want built in the neighborhood.

In the previous workshop, community members working in teams had used an “opportunity map” to identify potential neighborhood development sites for parks, retail and housing. After reviewing UE’s synthesis of their collaborative work, community members further refined the design ideas and discussed at length the impact of Mayor Jerry Brown’s campaign to create housing for 10,000 additional people in downtown Oakland. Residents are supportive of development: they have, for example, worked with developers on the conversion of a long-vacant Sears building into housing with ground-floor retail. At the same time, they seek development that bolsters the emerging sense of neighborhood and protects the affordable housing, small businesses, and other networks that long-time residents have established.

UE is now working with TNNA to turn the recommendations into a Neighborhood Plan that will help the neighborhood association achieve greater local control over development. The plan tells the story of the community’s planning effort, recommends land use and urban design policies to meet local priorities, and outlines private and public funding sources to create the park, calm streets, and community facilities that Telegraph-Northgate residents desire.