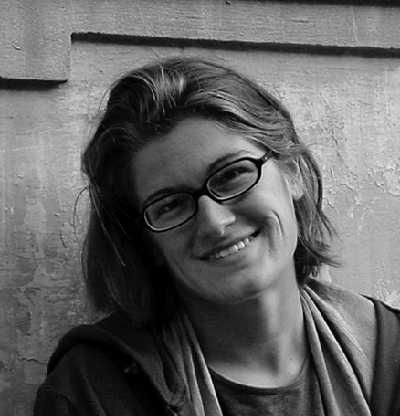 Jess Wendover started at Urban Ecology in August 2003. She is the recipient of one of five annual Frederick P. Rose Architecture Fellowships, a national program that places new architects with organizations that work in low-income communities. The three-year fellowship funds Jess to work primarily in East Oakland on several community design projects. Jess graduated from UC Berkeley with joint Masters degrees in Architecture and City Planning.

How did you first get involved in Urban Ecology and what attracted you to the organization?

My first experience was volunteering at the 24th Street BART workshops. I knew several friends in planning school who were active volunteers for the organization, so I had a sense of what was happening, but I was really impressed by the diversity of viewpoints that UE brought to the table at those workshops.

Your Masters’ thesis was on national capitols all over the world. How is that project relevant to your current work?

It’s the same idea at a smaller scale. In my thesis, I was looking at how people come to understand government from their experiences in and around capitol buildings. Governments and the architects they hire transmit complicated concepts about national identity and the meaning of citizenship through politicized design of parliaments and the public spaces around them. But just as often, those spaces are reclaimed by massive protests, like that of the Aboriginal Australians, who’ve maintained a structure they call “The Aboriginal Tent Embassy” on the front lawn of the Parliament House for 31 years. Protests like that start to break down the idea that it only means one thing to be an Australian. The Aborigines are saying, “Okay, that’s what you celebrate about our national heritage, but here’s a different interpretation, and we’re going to use the visibility of your capitol building to show our competing message alongside yours.” So basically, I was examining that distance, between a government’s intended message and how people understand a building in the ways that they use it on a daily basis.

The work that Urban Ecology does in low-income neighborhoods explores a lot of the same issues. Here’s a group of people who are living in a physical environment that doesn’t match the culture of their neighborhood that exists less tangibly. Their neighborhoods have been ravaged by decades of decisions about the built environment that were made in total ignorance about the things that a particular community needs to exists, to thrive, and to express what makes it unique. But a technical understanding of architecture, planning, and design can start to break down those discrepancies, so that the built environment becomes a more accurate reflection of the people who are using it and living in it every day. It’s a simple and seemingly self-evident concept, really, that you should talk to people about what they want from their neighborhood, but a staggering amount of planning is done without it.

What projects will you be working on for UE?

The focus of my work will be implementing the Community Action Plan that we’re writing for the 23rd Avenue area of the Lower San Antonio neighborhood in East Oakland. It’s a historic streetcar line stop that has seen a decline since it was criss-crossed by freeways that divided the neighborhood cut it off from the former center of economic activity at the waterfront. The central piece of both my architectural fellowship and the plan implementation will be work on developing a neighborhood cultural center on 23rd Avenue, but other complementary work includes advocacy for zoning changes, streetscape design guidelines, a facade improvement program, open space improvements, and helping to identify sites for infill, mixed-use development.

What’s your favorite part of the Bay Area?

Hmmm. I still like my former home, the North Shattuck corridor, and I certainly appreciate being in downtown Oakland every day now, but I live in, and love, the Mission. Alas, one cannot live on papusas alone, so a group of my Mission-living friends and I try to organize regular activities, mostly revolving around food, in other San Francisco neighborhoods. We’ve done Turkish in the Tenderloin, Peruvian in West Portal, and Indian in the Haight, so far, with a promising future prospect of vegetarian Korean in the Sunset.

I know very little about the outer suburbs. I have this grand design of taking my laptop one day and just going to work near some BART or Caltrain stations in places I’ve never been, like Lafayette, Atherton, or Hayward, but I suppose I’ll have to do some research to figure out if there’s actually a coffee shop within walking distance of the station once I get there.