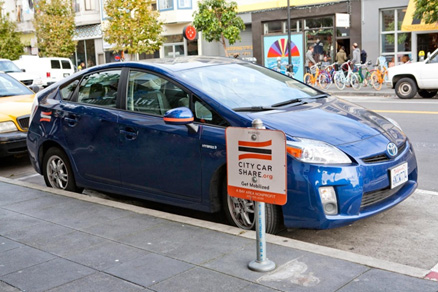 If you’ve ever rented one of City CarShare’s sporty, green VW Beetles, you already know that the service is convenient, economical and even fun to use. Now, a long-term study of the nonprofit organization by researchers at UC Berkeley has revealed that its members are helping the environment, too.

The study, which followed hundreds of car-sharing members for eighteen months, has found declining auto dependence. Since joining, nearly one-third of City CarShare households in San Francisco have sold one or more of their cars and two-thirds have chosen not to buy an additional car. Use of public transit, walking and bicycling by CarShare members has increased while automobile travel has declined by nearly half. These figures translate into a daily savings of 13,000 miles of vehicle travel, 720 gallons of gasoline, and 20,000 pounds of carbon dioxide emissions.

City CarShare rents cars that are scattered in convenient neighborhood sites throughout the Bay Area. Members pay a one-time fee to join and a monthly fee; when using a car, members pay by the mile and the hour. This allows members to use cars flexibly – for short trips to the store, or for longer trips out of town.