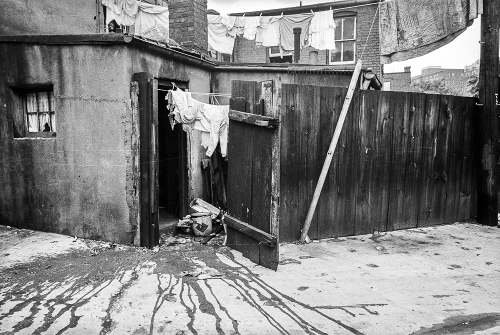 Nestled among the back alleys of many existing neighborhoods is a large, fallow urban resource. Alleys and backyards, if reclaimed as sites for secondary dwellings, could sustain unobtrusive and affordable new housing with only modest increases in perceived density. Using these neglected spaces in urban areas could also offset problems resulting from suburban sprawl, including urban deterioration and land use patterns that burden human and natural resources.

Alley dwellings have traditionally housed the poor for more than 150 years. In Washington, D.C. for example, back lots were subdivided to build cheap housing for African-Americans who migrated there after the Civil War.

Since 1985, most California cities have adopted ordinances allowing secondary dwellings in single family residential neighborhoods, a step mandated by a recent state law to encourage and control their development. But legalization is having little, if any, effect on the creation of accessory housing. An active program that promotes secondary dwellings needs to be pursued. Such a program would combine low interest loans with technical assistance on appropriate design and planning of alley dwellings.

An aggressive policy promoting secondary dwellings would help create a housing supply that is better tailored to the needs of today’s families. Families are growing smaller: single people living alone comprise 24 percent and single parent families 12 percent of U.S. households. At the same time, fewer families are able to afford traditional single family homes. While the size of the average American household is shrinking, home builders are constructing larger houses. A more or less homogeneous market of new single family homes has evolved, while modestly sized and modestly priced starter homes, such as those built in Levittown, have almost vanished from the market. In most locations where the demand for affordable housing outstrips the supply, secondary dwellings may provide an alternative.

There are many potential advantages of alley housing. Alleys provide a “second street” with their own prospect, open space, and access to the rear of a site. By avoiding dramatic physical and social changes in the neighborhood fabric, alley housing represents a good way to accommodate new development in cities and regions with growth controls, and to avoid NIMBY (“not in my backyard”) resistance common to affordable housing projects. By providing different unit sizes and prices to match a variety of household sizes and incomes, secondary dwellings can allow people to stay in the community by moving up or down as their personal conditions change. In this way it can help create a diverse mix of people and urban uses within a single block. Well-designed alley housing can enhance property values and provide rental income to existing residents. Finally, security and livability may be enhanced by transforming untended alleys and back lots into someone’s home.

Although secondary units typically have higher unit costs in comparison to mass produced tract homes due to the lack of scale economies, other savings might offset these disadvantages if calculated into a financial decision. For example, the use of existing infrastructure and the potential investment of an owner’s sweat equity help reduce development costs. Also, there are reduced or negligible land costs due to what might be considered marginal location. Efficiencies from centralized, higher density living allow residents to economize on transportation costs. And the ongoing management and maintenance costs may be cheaper when upkeep is conducted by the homeowner instead of a more costly management company or housing agency.

Existing homeowners are crucial actors in the creation of alley dwellings since development rests on their direct involvement and property. Therefore, they should be assisted in reaping some of the economic value of their investment. A program that provides low interest loans to assist homeowners in financing these additions may be all that is necessary to instigate development. But to further facilitate construction of secondary homes, design assistance must be provided to help the homeowner understand the kinds of physical patterns that are appropriate for alley housing.

Design strategies that derive from the neighborhood context and traditional alley housing will help create valued and cherished places. New buildings can be linked with the character and scale of the existing neighborhood by using a few simple details, for example, by matching windows, rooflines, and building materials. Privacy between the primary and secondary dwellings can be achieved by orientation, designing the windows of the secondary unit to face the alley and the side.

Architecture and landscaping can buffer the private realm of the dwelling unit from the common realm of the alley. A slight change in height, a narrow strip of planting, or a slight setback, often in the form of a porch, may enhance the quality of both alley and house. The small size of alley dwellings should be augmented by private outdoor space used as an extension of living space. This outdoor room, defined with landscaping that clearly designates ownership, allows privacy between the secondary dwelling and the primary residence. Landscape structures such as lattices, arbors, and trellises could be integrated with the building to reduce the visual impact of secondary structures.

Pre-designed prototypes could streamline the permit application and review process. Design variation using combinations of components can then add a degree of variety and individuality. Prototype construction documents could outline materials, dimensions, and processes clearly enough to enable a homeowner to build all or part of the dwelling, depending on their willingness and experience.

David Winslow is an architect living in San Francisco.