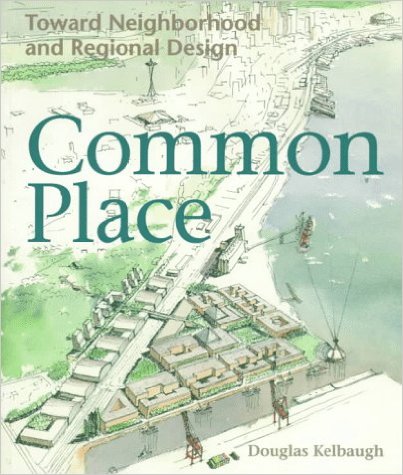 One the most important challenges facing urban ecologists currently is to develop a language of urban design that integrates different scales — the building, site, neighborhood, city and region — in ways that further social and ecological goals such as sustainability, livability, and equity. Douglas Kelbaugh’s new book Common Place is an important contribution to this project.

Kelbaugh, a professor of architecture and urban design at the University of Washington, begins with by-now-standard new urbanist critiques of suburbanization and modernist development. But then he moves deeper by critiquing other architectural movements such as postmodernism and deconstructivism, and by thoughtfully outlining “critical regionalism” as a design philosophy rooted in place, nature, history, high-quality construction, and vernacular traditions. In Kelbaugh’s view critical regionalism also encourages a sense of limits, creating places that are human scale and that acknowledge physical and temporal boundaries.

This critical regionalist ethic is illustrated through design charettes organized by the University of Washington, led by many of the West Coast’s leading urban designers. These gatherings address problems such as the revitalization of Seattle’s University District, the reuse of a naval air station, the creation of a new center for the town of Lacey, and the development of a new neighborhood on “brownfield” land in Seattle’s Interbay district.

Common Ground provides a sophisticated and well-illustrated analysis of plans for these sites. Although one might wish for more discussion of how these designs could be financed and built, the book’s goal is simply to explore the nature of socially and ecologically-conscious design for the region. Many of its ideas have already been influential in the Seattle area. For designers and planners elsewhere Common Ground represents a valuable contribution towards development of a sustainable design vision.

Stephen Wheeler is a doctoral candidate in city and regional planning at the University of California at Berkeley.