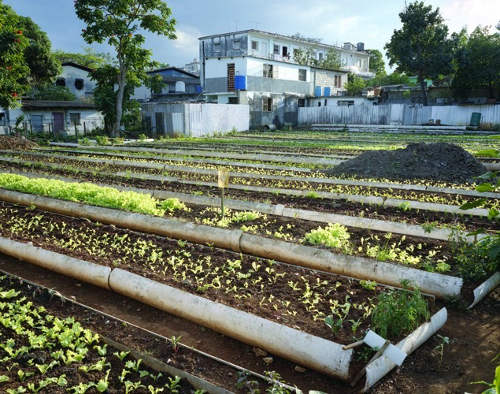 Urban agriculture is actively promoted in Havana, Cuba as a means of addressing the acute food scarcity problems of the “Special Period in Peacetime,” which developed when Soviet aid and trade were drastically curtailed starting in 1989. During the period from 1989 to 1992 average daily per capita calorie consumption of Cubans dropped by an estimated 20 percent, and average daily per capita protein consumption dropped 27 percent. Conditions were further exacerbated by a severe storm which destroyed much of the country’s sugar crop in 1993, and by a tightening of the U.S. blockade in the early 1990’s.

The Ministry of Agriculture has hired and trained agricultural extension staff to work at the community level in Havana. Every neighborhood in Havana has a staff member who oversees the extension activities. The extension workers assist gardeners in obtaining land, encourage them to form clubs, answer technical questions about gardening, acquaint the gardeners with resources available to them, and maintain communication with the Ministry. The Ministry also works with a number of Cuban and foreign organizations to coordinate trainings for gardeners and extension workers, and to provide materials such as tools and hosing. The following analysis is based on in-depth interviews with 42 gardeners during the period from July through September, 1995.

Impacts of the Gardens on Food and Economic Security

The quantity and quality of the food available to gardeners’ households was significantly increased through the production of plant and animal products. An average of 5.83 people ate in the gardeners’ households, and a total of 9.52 people in their extended families received food from the gardens. If this pattern were true throughout Havana, then one out of ten people in the city were receiving some food from the gardens.

Most gardeners contributed and/or sold food to their local communities, enhancing the local food supply. For some this function was accomplished through gardening clubs. Donations were often made to schools, nursery schools, and nursing homes. Gardeners also gave to neighbors, especially those who were not very well-off.

A number of individuals spoke about gardening as an important way of solving problems that face Cuba, especially as a means to help the revolution. One gardener commented that he wanted a farm to “help the revolution with a huge harvest.” Another observed that “work is good for health, spirit, and the revolution.”

In Havana the replacement of unsightly landscapes with gardens is one of the many unintended benefits of a program which was designed to deal with the country’s food crisis. Because of the incredibly large scope of the program the city form itself is being changed alongside some of the city’s functions.

Quite a few of the gardeners started their gardens in abandoned lots or dumps. Gardeners in one neighborhood constructed impressive rock walls, usually about a meter tall, with the rocks removed from the once vacant lots that many of the gardens now occupy. A number of the gardens in this area are quite large and contain multiple plots.

Replacing vacant lots with gardens has improved neighborhood safety. A number of the gardeners said the transformed lots had been unsafe areas where people had previously been afraid to walk. Two participants in the study mentioned that the area they gardened had once been referred to as the “Hill of Fear.” It had been restored to a lovely series of gardens.

These gardens create a prominent pattern throughout much of Havana, making food production very transparent. While the peripheral areas contain more gardens than the city center, many parts of Havana support food gardens. The gardens bring the multiple aesthetic and environmental benefits of increased vegetation to the city as well as decreased food transportation and storage requirements.

Cuba is being heralded for its “green” agricultural practices which have developed in response to the striking drop in agricultural inputs and fuel during the “Special Period.” Much of the success of this approach is attributable to the country’s impressive research capabilities and the commitment of many Cuban scientists to environmentally sound farming and food processing methods.

The food gardens in the study are organic by default. It is illegal for the gardeners to use chemical inputs because of the country’s restricted supplies of agricultural chemicals. Further, chemical inputs are not sold on the open market in Cuba.

The gardeners showed varying levels of attachment to the environmentally-benign gardening methods they were practicing. One reason for this appeared to be a variation in skill in managing soil fertility and insect problems. Gardeners who were aware of composting and pest control techniques were far more enthusiastic about organic gardening than those who had no knowledge or limited knowledge of these techniques. Gardeners who had not been exposed to these techniques spoke about the need for chemical fertilizer.

The gardeners were asked how important “improving the environment” was as a reason for gardening. The average response was 3.14 on a scale of 1 (“not important”) to 4 (“very important”). When asked about this question, one respondent noted: “I am aware that the environment has to be protected.” Another gardener spoke about his plans to develop a living fence around his garden.

The study findings point to the enormous contributions that urban gardens made to the gardeners’ households and surrounding communities. It is, however, important to understand the constraints under which the gardeners operated.

Many of the problems experienced by the gardeners reflect the severe resource and infrastructural constraints which face the country. For instance, water availability was a problem throughout Havana. During the study most regions of the city had water service for only two hours every other day. Water use was generally restricted, with excessive use resulting in high charges and a possible shut-off of service. Many gardeners carried water to their gardens, as they did not have hoses and hook-ups at the sites.

Training was another challenge that faced the program. Many gardeners in Havana drew upon agricultural skills they had learned in the country-side. During their interviews many complained about the limited space and water available to them, and the poor soil quality. Many of these individuals were unaware of gardening techniques that conserve water, increase yield and strengthen the plants’ resistance to pests.

The active role of the Cuban government in promoting and supporting urban agricultural activities is unique from a global perspective, and surely accounts for much of the success of the program. The commitment and considerable efforts of the gardeners must also be recognized. The impressive scope and achievements of Havana’s gardening program should be a inspiration for all adherents to the principles of urban ecology.

Angela Moskow is completing a Master’s degree in International Agricultural Development at the University of California at Davis.