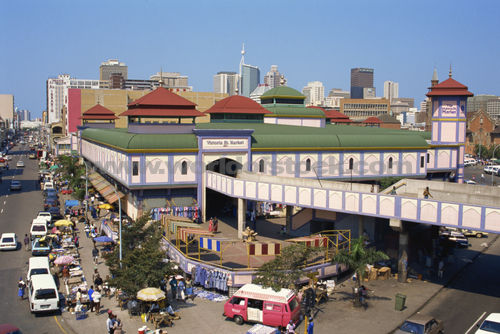 Every day at the Durban Station Market, street vendors do a booming trade selling plant muti (medicine) to the thousands of commuters who pour into the city-center. In this port city, in South Africa’s Eastern Province of Kwazulu-Natal, over 700 species of indigenous plants are sold for medicinal purposes. At markets like these customers can buy plant remedies to alleviate sinus complaints, ward off floods and evil spirits, or bring good luck in court cases. This trade is worth millions of dollars a year and is the sole livelihood for a network of plant gatherers, traders and traditional healers, locally known as inyangas. It also poses an enormous threat to Durban’s natural resource base.

Durban is one of South Africa’s largest and fastest-growing urban centers. In recent years, local demand for muti has become so great that collectors are willing to risk prosecution to gather protected species. Medicinal plants are further threatened by shrinking habitat, as the urban poor occupy vacant land in order to escape township violence and congestion. Some 30 percent of Durban’s 2.5 million people now live in squatter settlements. This combination of loss of habitat and over-exploitation means that many plants, some found only in the Durban Metropolitan Area, have become endangered or locally extinct.

One project addressing this problem is the medicinal plant nursery at Silverglen Nature Reserve. The Reserve, run by the municipality, is the largest single piece of publicly-owned coastal grassland remaining in the Durban Metropolitan area. It is tightly sandwiched between Umlazi, a huge and ever-growing black township, and Chatsworth, a largely Indian residential and industrial area.

The nursery was started about twelve years ago when Cele, a renowned Umlazi inyanga, approached the conservation officer at the reserve because he had noticed that it was harder and harder to find the plants he needed for his practice. The conservation officer, hoping to protect the reserve’s remaining stocks of medicinal plants which had already been extensively harvested, came up with the idea of cultivating large quantities of endangered species at low prices.

Julian Kruger, a horticulturalist with the municipality, says that one of the nursery’s biggest successes has been the mass cultivation of wild ginger (isiPhepheto) which had been harvested to extinction in Kwazulu-Natal. Herbalists can now obtain plants locally instead of relying on wild stocks from Swaziland and Mozambique. He says some healers, however, still prefer to use “wild stock because these plants have endured droughts and lightning storms and will make more powerful muti.”

The nursery, the first of its kind in Africa, cultivates about 120 at-risk species, many of which are grown in large enough numbers to supply other nurseries, landscapers and local gardeners. Although the nursery supplies starter packs to anyone interested in cultivating medicinal plants, their main focus is to encourage local herbalists to grow their own. Groups of 10-12 inyangas come to the reserve for three or four days and are taught how to gather seed, clean the plants and propagate them. The hope is that they will return to their communities and spread the word that only by cultivating their own supplies can people continue to make a living from medicinal plants.

Herbalists who are forced to buy expensive plants from Swaziland or Mozambique because they are no longer available locally are eager to learn how to cultivate their own supplies. Kruger emphasizes that the information exchange at these workshops is very much a two-way process: while the inyangas learn about sustainable use the municipality’s natural resources, horticulturists learn about the medical and magical properties of the plants. Local school children are also regular visitors to the reserve.

One area of current reserve research is sustainable harvesting techniques. Kruger explains, for example, that years ago it was customary for gatherers to strip medicinal bark only from the Eastern side of tree trunks — in a moist climate like Durban’s the bark would eventually regrow. Now though, because of rapid urbanization and increase in demand, gatherers are ringbarking and thereby killing trees.

As a stop-gap measure, workers at the reserve have painted the bark of many endangered trees to prevent collection. But the reserve, the nursery and the paint can only protect Durban’s natural biodiversity for so long before larger issues like poverty, overcrowding and lack of education need to be addressed. Until then, people may be forced to over-exploit local resources in order to survive.

Rebecca Koffman is a writer who grew up in South Africa and now lives in San Francisco.