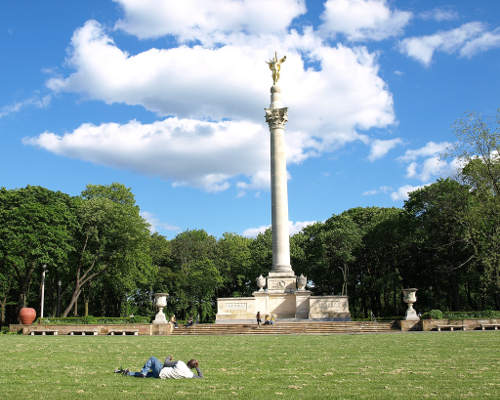 Today’s urban estuaries are lined with miles of linear bulkhead and seawall. But just a century ago, they had a highly varied coastline of beaches, marshes, rocky outcrops, bays, cliffs and creek mouths. Where could the immense amount of materials necessary to rebuild such variety come from? And where could we find the political will required to reverse or remake these hard won feats of engineering? In our port cities, both resources may be found in dredging, and the need to remove and dump millions of cubic yards of harbor mud every year.

Ports in the New York region dredge up to 6 million cubic yards of harbor mud per year. Instead of dumping $36 million dollars per annum into an ocean disposal site (at $6 per cubic yard), we now have the opportunity to invest $60 million a year (at $10 per cubic yard) in using the material for wetland restoration. An acre of marsh, according to Miller in Living in the Environment, is equivalent to a $75,000 sewage treatment plant in terms of its ability to break down ammonia, BOD, and other pollutants, not to mention enormous benefits to fisheries. To maximize the ecological and financial return, marshes could be built where pollution is a problem — i.e. around some of the region’s landfills.

The Gaia Institute is proposing to do just this at Pelham Bay Park on Eastchester Bay. At 2,700 acres, this is the largest park in New York City and contains one of the smallest of the city’s landfills (81 acres).

The landfill ceased operations in the late 1970’s, but none too soon. Illegal dumping of industrial wastes, including solvents and waste oil, put it on the New York State Inactive Hazardous Waste Site List. This dumping, and landfill design of that period, led to later problems. Tides move Eastchester Bay in and out of the rock armor surrounding the landfill. All five major landfills in New York were built on top of salt marshes with such permeable edges to ‘clean out the leachate’. In the case of Pelham, the City of New York was found in violation of the Clean Water Act, since a French drain collection system was actually constructed to discharge leachate more efficiently into the bay. Sediments tested in 1992 and 1993 were found to contain lead, benzene, and various hydrocarbons, as well as high concentrations of ammonia and BOD. To make matters worse, the landfill is less than a mile from Orchard Beach, one of the most popular bathing areas in the western Long Island Sound. The landfill also happens to be built on one of the most popular and productive fishing areas of days past, and the area still attracts fisherman, regardless of official prohibition. Construction is still underway to put an impermeable cap put over the landfill.

The Gaia Institute began an investigation of the use of wetlands and other technologies to treat the leachate from the Pelham Bay Landfill in the late 1980s, and produced a report in May 1994 on the feasibility of ecologically and biogeochemically based treatment. One recommendation was to use dredge materials to establish wave breaks, and to grade the surrounding shoreline to the mid-tide mark for salt marsh restoration. The accompanying graphic shows the plan, to surround the landfill with 20-25 acres of marsh, continuing the restoration south to include 5-10 acres along the southern tier of Pelham Bay Park. The plan would place 300,000-500,000 cubic yards of dredged materials at an average depth of more than five feet. More contaminated class 3 materials could be placed on the bottom, and class 1 and 2 materials on the top, in a layercake. Sausage-like wave barriers composed of tough plastic geotextile membranes “stuffed” with sand would hold the dredged substrate for the marsh planting in place.

Given the new urgency of finding new ways to dredge the Ports of New York and New Jersey (new regulations have placed ocean dumping out of the reach of a sizable amount of local harbor mud), this proposal is now receiving serious consideration from all major city, state, and federal agencies and authorities.

Paul Mankiewicz is a plant biologist and director of New York’s Gaia Institute.