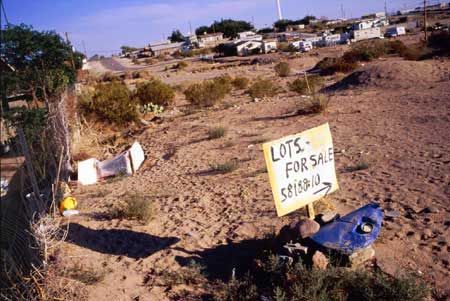 Texas has witnessed an unusual pattern of development along its 2,000 mile border with Mexico. Colonias are unincorporated, “informal” rural subdivisions that usually lack water, wastewater service, and paved roads. There are an estimated 1,436 such settlements along the Rio Grande, ranging in size from a few households to one thousand or more. The total population in colonias is estimated at 340,000. A 1995 Texas Water Development Board study estimated that 81,000 colonia residents have no access to potable drinking water, and 232,000 are not served by wastewater treatment.

Low-income families are the most common buyers of land in colonias. Signs offering “$1 Enganche” ($1 down payment) are common on rural roads. The chance to own a piece of land is an attractive alternative to public housing rental units, which, despite their long waiting lists, comprise the only other affordable housing option in South Texas. However, the rural location of most colonias and lack of access to public transportation means that access to employment is limited. The poverty rate in counties along the border runs as high as 40 percent, and within colonias it is even higher. A 1993 study by Texas A&M University found unemployment rates ranging from 20 to 60 percent within colonias, compared with Texas’ state average of seven percent.

Some colonias are established legally, but many are the product of illegal land sales by sham real estate businesses. Taking advantage of Texas’ lax consumer protection laws, ‘developers’ offer land that hasn’t been prepared for habitation to families looking for a small piece of land in which to invest.

What the buyers don’t know is that the seller’s promises of water, sewer, and electric amenities are false. Yet over the course of years, colonia developers manage to collect thousands of dollars from occupants who all the while carry their water for drinking, bathing, and cleaning in old oil drums to their homes, install septic tanks illegally, and jack electricity from the wires along the nearest county road. Without legal subdivision documents or written record of payments, many colonia residents are technically illegal squatters. They are victims of a real estate scam who don’t realize the tenuousness of their hold on the land.

The sheer numbers of people living in colonias have brought the poor housing conditions, the lack of safe water and wastewater systems, and the implications for public health and safety in this flood-prone region to the state government’s attention. The Texas Attorney General’s office has sizable judgments under its belt from lawsuits against colonia developers, but the damage awards that would finance infrastructure and housing construction have proved nearly impossible to collect. Further, taxpayers in many counties are unwilling to assume the burden of financing the infrastructure costs that should have been paid up front by the ‘developer’.

In the meantime, residents of many colonias are organizing to build basic infrastructure in their neighborhoods without waiting for legal and government entities to sort out the mess. For example, several have constructed cheap and environmentally-sensitive wetlands to treat wastewater by pooling labor and equipment from resident families.

With federal and state assistance, nonprofit groups in five border counties have sponsored ‘Self-Help Centers’ offering information on new construction and home improvement as well as providing tool lending libraries. Although financing is still scarce, several organizations have begun to offer low-interest loans to colonia residents to improve their living conditions. Still others are electing community leadership councils to watchdog the decisions by county commissioners that affect their colonia.

While the state remains entangled in legal battles, small organizations in the Rio Grande Valley, the fertile agricultural belt between McAllen and Brownsville, have begun to build homes in colonias that are more permanent, affordable, and tailored to the region’s environment.

For example, Habitat for Humanity’s La Frontera Initiative builds homes of simple materials with plenty of potential for “sweat equity” contributions by the future residents, according to Director Fabio Angell. The homes are designed to reap the best and fend off the worst of the Valley’s defining natural features: sun and wind. Dwellings feature a screened six-inch gap between the top of the walls and the roof that provides a natural ventilation system. The houses are positioned so that the constant east-to-west wind that blows across the region from the Gulf of Mexico cools the house by several degrees. The west side of the house, where the sun burns fiercest and longest during the summer months, has no windows. Sixty-gallon water tanks on the roof need only two hours of sun to heat the water to 150 degrees. With building materials reduced to the bare minimum of rebar, cinder blocks, cement, and sealant, homes are built for approximately $15,000.

Beyond building houses, the La Frontera Initiative is designed to encourage colonia residents to help themselves. Angell works closely with other grassroots organizations to prepare home recipients to undertake a low-interest home mortgage and to use the alternative technology employed in the homes. The program has built homes with seven families in its first two years of operation, and plans to build five more in 1998.

‘Self-help’ has become the State of Texas’ mantra for colonias as well. Although it has established a grant program for self-help projects, the state has not yet devised a broader strategy to improve housing conditions, build water and wastewater systems, and clarify land titles, even as colonias continue to proliferate. While the state must act to prevent scams that prey on low-income families, the appearance of colonias along the border also presents an unusual opportunity to employ strategies for affordable and resource-efficient housing and infrastructure.