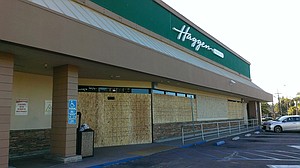 Over the past 30 years, supermarket chains in Los Angeles have closed older, less profitable urban stores to build bigger and more modern markets in the suburbs. This trend follows the out-migration of middle-class households from the city. Remaining inner-city residents, many of whom are low income and have few transportation choices, have seen their food access diminish to either corner “mom and pops” with exorbitant prices and poor selection, or an inconvenient and expensive trip to distant stores. That bus lines are planned to transport commuters into and out of downtown rather than to accommodate inner city residents’ daily needs aggravates this problem.

The magnitude of supermarket flight is substantial: approximately one million people in Los Angeles County reside in areas where access to affordable and nutritious food is a problem. In the remaining supermarkets, prices tend to be higher than in middle-income areas where supermarkets compete for highly-mobile customers. The 1993 UCLA Department of Urban Planning study Seeds of Change found that a basic market basket costs 36 percent of the median income for a typical family in one low-income neighborhood of South Central Los Angeles versus approximately 12 percent in the middle-income community of Lakewood.

To increase everyday access to affordable and nutritious food in low-income communities in Los Angeles, a large group of social service providers, farmers’ markets, anti-hunger advocates, and community gardening and greening organizations have begun to build an alternative food system. These groups endeavor to create a system which is grounded in communities rather than corporations and is sustainable rather than subject to the whims of charity or government support. The Los Angeles Community Food Security Network is a loose affiliation of groups that share resources, develop more comprehensive programs, and coordinate advocacy for local food system policies.

Connections made through the Network led to the development of the Watts Growin’ Project. With diverse partners such as the Southland Farmers’ Market Association, the Common Ground Gardening Program, L.A. Harvest, and the Watts Health Foundation, Watts Growin’ works with gardeners at a two-acre site outside one of the poorest housing projects in the city to increase their produce sales to the surrounding community. Here, 60 families, primarily of Latino origin, tend traditional crops such as quelite, tomatillos, and 12-foot-high corn plants. One of 13 projects awarded funding through the newly established USDA Community Food Projects grants, Watts Growin’s long-term plans include the creation of a label for urban-grown produce.

All the talk of gardens as an economic development opportunity has brought the Watts Growin’ Project together with other market gardens from around L.A. The collaboration is meeting regularly to share experiences and information on how to market their harvests. It also is planning a conference in October which will bring together urban gardeners, farmers’ market managers, farmers, and small-scale produce buyers from restaurants, caterers, and natural food stores to figure out how the gardens can serve local markets. This spring, several market gardens in the Bay Area hosted members of the L.A. group to share their experiences about growing for market. “Because we are building something so new, we have to learn the ropes of growing on a small scale for local urban markets together,” says David Buchbinder of justiceville Dome Village, a geodesic dome community for homeless people.

The goal of market gardening varies from garden to garden. With the exception of the therapeutic Vets Garden in West Los Angeles, the vast majority of L.A. gardens have been developed to grow for personal consumption. Community gardens often prohibit the sale of any part of their harvest. Debbie Fryman, a board member of the American Community Gardening Association and co-founder of the L.A. Community Garden Council, says “Community gardens should remain places where people can grow for their own families. However, if there is space and time and the desire to grow for market, gardens should allow low income gardeners to reap this economic development opportunity as well.”

While community-based projects like these are essential to building up food security, inner-city residents still need the option of going to a full-service supermarket to purchase the items they can’t get directly from the ground. Several stores are beginning to see the need to improve their service to transit-dependent people, and are offering van service. El Tapatio in South Central and Fines Market in East L.A. provide a free ride home to customers who purchase $25 to $30 worth of food. The stores say the cost of the van service is recovered through increased sales, reduced shopping-cart loss, and community support. During the 1992 riots loyal customers rallied around Fines Market to prevent it from being looted. With the van service, says store owner Alan Fine, the stores are putting something back into the community.

While initiatives like these are important, there is an important need for food security public policy. Between 1994 and 96, the Interfaith Hunger Coalition, the UCLA authors of Seeds of Change, and Community Food Security Network members organized an effort to gain city approval of Los Angeles Food Policy Council. Approved last year but not yet formally convened, this advisory body (now entitled the L.A. Food Security and Hunger Partnership) will be composed of 18 representatives from different sectors of the food system. It will bring together supermarket executives and community gardeners to review and recommend city policies related to food and hunger. Potential actions include gaining lower water rates for community gardens, creating intra-neighborhood shuttle routes, and seeding new food-related community economic development projects such as community kitchens or market gardens. Even in a time of fiscal conservatism, the City Council allocated $280,000 to fund the L.A. Food Security and Hunger Partnership. In doing so, it took a leap towards making Los Angeles a more just and livable city.

On a recent Wednesday afternoon at the West Vernon Elementary school, Maria Esparza, Delia Ramirez and Paulina Flores marveled at the small, fresh nopales (cactus leaves) which farmers Maria and Joel Espino had carefully picked just a few hours earlier at their farm in Ontario, CA. “When they are small and new,” Ramirez and Flores explained “they are much more tender than those in the supermarket.” These community members from a neighborhood in South Central Los Angeles are strengthening their food security through the Market Basket program.

The Market Basket program enables subscribing households to get a box of fresh fruits and vegetables on a weekly basis from farmers who also sell at a local farmers’ market. The boxes are available on a sliding-scale basis. The program seeks to provide locally grown food to people who cannot get to the farmers’ market (or other sources of high quality fresh produce) by establishing delivery sites at schools, day-care centers, workplaces and other places where people congregate. This program also tries to meet the cultural preferences of the communities by providing two different types of baskets based broadly on Latino and African-American preferences.
– Michelle Mascarenhas

Only 19 of 38 convenience stores in East Austin, Texas sold milk, according to a recent report by Public Voice for Food and Health Policy, yet all of them sold alcohol. Only five of the 38 offered the food choices necessary to prepare a balanced meal. The report makes recommendations on how to bring supermarkets back to the inner city, including the creation of ‘food empowerment zones,’ modeled after economic development empowerment zones. For more information, contact Public Voice at 1101 14th St., NW, Suite 710, Washington DC 20005; (212) 371-1840.