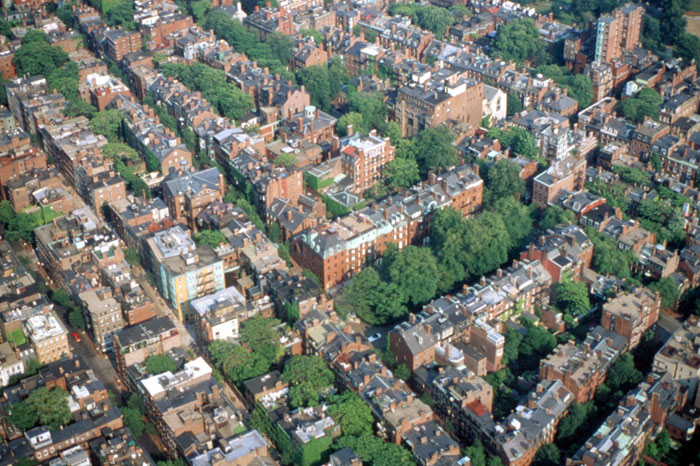 Scientific data show temperatures in cities all over the world, from Baltimore and Phoenix to Shanghai and Tokyo, are steadily increasing by one half to one degree Fahrenheit every ten years, and the primary cause isn’t global warming. Cities — urban heat islands whose summertime air temperatures are 6-8°F higher than the surrounding countryside — are warmer than they need to be, say scientists at the Lawrence Berkeley National Laboratory. Investigations show that urban areas are warmer for two reasons. First, they use dark construction materials which absorb solar energy. Second, there are few trees, shrubs or other plants to provide shade and cool the air. Both these factors are within the power of builders, planners and communities to change.

Los Angeles in 1934, covered with irrigated orchards, reached a summer high temperature of 97°F. As buildings and pavement replaced these orchards, maximum temperatures warmed to 105°F or more in the 1990’s — an increase of eight degrees!

These higher temperatures lead to more than mere discomfort. More energy is used to cool buildings and automobiles, raising energy and gasoline expenses, as well as contributing more emissions to the atmosphere. As the rate of smog formation increases with temperature, so emissions on the hottest summer days “cook” into a thicker smog — dangerous for people at respiratory risk, and adding to the medical costs of urban residents. And the rising incidence of urban heat disasters, as in Chicago in the summer of 1995, has increased mortality rates.

But cities don’t have to be so warm. Researchers at the Lawrence Lab have found some solutions. Using construction surfaces with higher albedo values (reflectivity of solar energy — see diagram) and strategically planting trees and other vegetation can reverse this heat island effect. A study of Los Angeles, where trees and high albedo surfaces were theoretically added to about 15 percent of the city, found peak summer temperatures dropped by 6°F, and smog production decreased by 10 percent — equal to removal of 3-5 million cars from the roads! Studies using high albedo roof coatings in California and Florida found cooling energy use was reduced by as much as 67 percent.

Trees and plants don’t have very high albedo, but they shade buildings and pavement from the sun’s heat. They also “evapotranspirate” moisture through their leaves, removing heat from the air in the process. A mature, properly-watered shade tree with a 30-foot crown can process 40 gallons of water in a day –equivalent to removing the heat produced by a small space heater running for four hours. Studies in Sacramento have found that shade trees placed around buildings saved up to 60 percent of the cooling energy used.

How can we apply the results of this research? Here are a few guidelines:

Use white or light-colored shingles on sloping residential rooftops, and white coatings on flat residential and commercial roofs.
Use light-colored paving materials, such as concrete, instead of dark asphalt.
Use ground covers or low-water use grasses around buildings, replacing pavement wherever possible.
Plant trees and shrubs to shade windows, roofs and walls from the summer sun, most effectively along the south and west walls of buildings.
Shade air conditioner condensing units from direct sun with plants or awnings which allow air flow.
Group trees in groves and along corridors to create oases which cool nearby neighborhoods.

Painting a building and coating a roof are fairly straightforward and require little maintenance. But planting a tree or a shrub is not so simple. Trees in the city are often subject to conditions that doom their longevity from the start. A tree needs at least 30 square feet of soil for its roots to grow, and should be allowed to grow to maturity without being pruned away from buildings and electric lines. Trees also need good soil with adequate drainage. And for a good start, a tree needs three years of watering, weeding and protection from lawnmowers and vandals.

The steps needed to cool urban areas are simple and sensible. But their application requires some rethinking of the current use of trees, plants and construction materials. Thoughtful changes to design practices and zoning codes can improve urban comfort, save energy and money, reduce smog, and perhaps even save a few lives.