Remember the Alamo and the World’s Tallest Man, Too 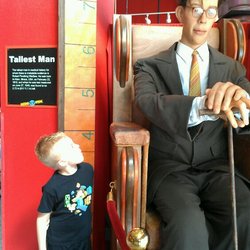 To most Texans, the Alamo is the most important historic site in the world — bar none. Now the principal landmark of Texas independence might have to share its square in the historic core of San Antonio with a monument of an entirely different nature. Publishers of the Guinness Book of World Records plan to open a new museum, just steps from the most famous structure in the Lone Star State.

Guinness, purveyor of the unusual and the just plan weird, currently operates museums in six cities — Copenhagen; Gatlinburg, Tenn.; Hollywood; Las Vegas; Niagara Falls; and Orlando. Some in San Antonio are asking what impact the new museum will have on the city. “To the Daughters of the Republic of Texas and others, the Alamo, though almost razed a century ago to make way for a market, is a sacred site,” writes Steven G. Kellman in the San Antonio Current. “A gallery of grotesquerie directly across Alamo Street might seem like blasphemy, like playing racquetball against the Wailing Wall or hawking pork rinds to the faithful on their hadj.”

But Alamo Plaza, like many other popular historic sites around the world, has already been profaned by commercialism. The Current describes the plaza as “ground central for T-shirts and coonskin caps,” the Alamo gift shop peddles collectibles for the masses, and a Ripley’s Believe It Or Not Museum is located a few doors down from the proposed Guinness Museum. A few blocks away, the Hertzberg Circus Collection venerates sideshows and animal acts, and the kitschy Plaza Theater of Wax is nearby. “Any tourist offended by mammon is better off in honest Bracketville,” observes Kellman, “whose imitation Alamo was not meant for anything but show business.”

The city’s Historic and Design Review Commission must approve the proposal to convert the old Palace Theater into the Guinness Museum. The commission has referred the question to its Architecture Committee. Its task is to determine whether plans drawn by architect Lloyd Jary, which create a recessed entry and open the building to the street, conform to the style of neighboring structures. As long as the physical design is deemed acceptable, the commission cannot control what goes on inside. Given the track record, it seems likely that tourists will have another attraction in the center of San Antonio, and that Davey Crockett and General Santa Ana will again be rolling over in their graves.