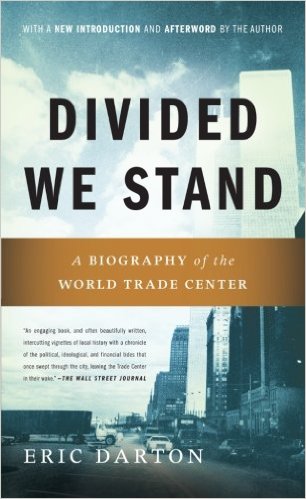 Midway through Divided We Stand, I pause and say aloud, “This is fascinating.” I hadn’t expected to respond this way to a book on New York’s soaring World Trade Center. It simply hadn’t struck me as an engaging subject for a book. But in journalist Eric Darton’s hands, the World Trade Center becomes more than a building, it emerges as the centerpiece of a complex tale of power and conflict in the heart of America’s most important city.

Darton almost seamlessly weaves together different strands of American urban history, creating a whole cloth out of threads of our architectural, political, and social pasts. The author stitches into his story concise but informative discussions of the emergence of modern urban planning, public authorities (the Port Authority of New York and New Jersey owned and developed the site), and urban renewal.

Divided We Stand resembles a true biography in its strong character development. We meet various members of the Rockefeller family, including brothers David and Nelson who played pivotal roles in the development of the World Trade Center. Jane Jacobs and neighborhood activists appear to defend New York’s existing communities against the bulldozers. Daniel Burnham, Le Corbusier, Patrick Geddes, and various members of the Regional Plan Association provide context for design aspects of the World Trade Center.

Darton also has a journalist’s eye for drama. He bookends the center’s history with bombings: attacks on early skyscrapping corporate headquarters and the blast that shook the World Trade Center in the early 1990s.

The book is not flawless. Annoying little errors mar the book — the Industrial Workers of the World become the International Workers of the World and Big Bill Haywood is renamed Big Bill Heywood — and Darton occasionally overwrites. Despite these flaws, Divided We Stand is an enlightening tale. Darton’s broad approach to architectural history helps reveal the city in all its complexity.