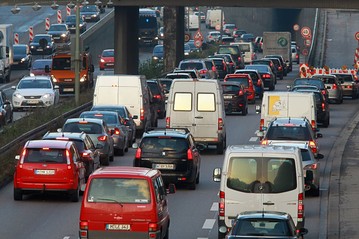 In Munich, one of Germany’s most attractive cities, political controversy rages over whether the Middle Ring Road needs three new tunnels. By putting heavily burdened segments of the highway underground, advocates promise to enhance safety on the city’s streets, banish the constant noise from traffic, and eliminate noxious fumes. The city’s heavily financed pro-tunnel advertising campaign presents a rosy picture of large new parks in place of roads. Its logo is a smiley-faced family enjoying the sun and greenery above, while smiley-faced cars frolic in the tunnels below.

The political debate for and against tunnels divides strictly along party lines. In favor is the Right — the Christian Socialist Union (known as “the Blacks”), the extreme right Republicans, the Free Democrats, generally associated with business interests, and a small, new party called the Automobile Taxpayers’ Party. Against the idea is the Left, or Red-Green coalition, currently holding a majority in the City Council, consisting of Social Democrats and the Greens, joined by a party of the little people, known as “David Against Goliath.” Both sides have their citizen-action groups and signers of petitions.

Tunnels are to be avoided, the opponents say, because they only serve to generate more traffic. If traffic is made more fluid by raising the level of service, more traffic will be attracted to the easier and quicker route, until it too is congested. One axiom is often repeated: “He who sows roads will reap traffic.”

One citizen activist prominent in monitoring traffic and urban development in Munich for more than 30 years is Karl Kluhspies, who points out that the promised benefits of previous Middle-Ring-Road tunnels failed to materialize. Red-Green and ecological groups further argue that if the main problem is too much traffic in the streets, ways must be found to reduce the absolute volume of traffic. Arguments that road-building generates jobs are specious, they say, since road building is highly mechanized. Subsidies should go instead to improve public transit and the labor-intensive processes of recultivating the land.

In the 1996 municipal elections the Red-Green coalition, with its anti-tunnel campaign, once again won a small majority of seats in the City Council. Yet shortly thereafter, in a citizens’ petition campaign mounted by the Blacks, a referendum in favor of tunnels won a narrow majority of 50.5 percent.

The Bavarian state government, in the hands of the Right, has already transferred 250 million marks ($150 million) to the city, enabling groundbreaking for the first of the new tunnels, and the first trees are scheduled to be felled by the middle of this year. The Blacks want planning of the other two tunnels to accelerate, and threaten a new referendum when the current one expires in less than three years. Although the ultimate outcome remains unclear, putting sections of highways underground seems unlikely to be the best way toward healthier cities.

Ron Widenhoeft is a Professor of Transportation Engineering at the Colorado School of Mines.