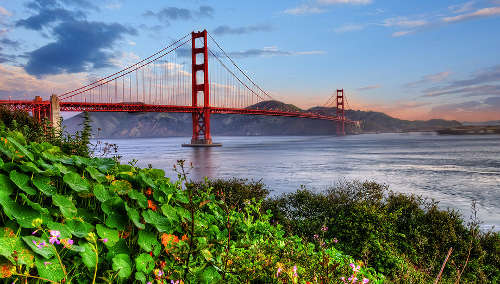 Although the Bay Area is moving away from sustainability in many ways — in terms of automobile use, resource consumption, suburban sprawl, affordable housing and equity, for example — it is making progress in other areas. Following are some Bay Area success stories profiled in the Blueprint for a Sustainable Bay Area. If initiatives such as these are repeated throughout the region, the Bay Area can really begin to head in a sustainable direction.

Restoring a Creek in Napa

In the late 1970s the city of Napa removed a parking lot and several buildings from its downtown area, and used the land instead to create walkways and pocket parks along the Napa Creek. Native vegetation was restored along the stream’s channel, and new viewing bridges built over the creek. The result is an attractive ecological centerpiece to the city, a place for residents to walk and experience nature, and for fish and native plant species to thrive.

Rejuvenating the Embarcadero in San Francisco

The 1989 Loma Prieta earthquake did San Francisco a big favor in one respect. By weakening the Embarcadero Freeway so much that the structure had to be removed, it allowed for a waterfront renaissance. Demolition of the gloomy, oppressive double-decker freeway allowed sunlight to return to the city’s historic Embarcadero, and now a $62 million waterfront revitalization plan is underway. Among the elements already built or in the works are a 25-foot-wide pedestrian promenade, a palm-lined boulevard, a MUNI light rail line connecting downtown to Mission Bay and the new ballpark, and the Promenade Ribbon, possibly the longest public artwork in the U.S.

Downtown Oakland is well-served by local and regional transit and is rich in diverse businesses and communities. This is exactly the sort of location that should form a centerpiece of a sustainable Bay Area. Yet empty buildings, vacant lots, and a lack of after-dark activity undermine its attractiveness to companies and residents.

In recent years, however, a flood of initiatives is re-energizing downtown Oakland. These efforts are anchored by the City Center, a pedestrian-oriented plaza at the 12th Street BART station created in the mid-1980s, and include the two Federal Buildings (completed in 1994), the seismic retrofit of City Hall (completed in 1996), and Jack London Square, a late 1980s waterfront development which is attracting ever-growing crowds. The city is also rehabilitating the Broadway Building at 14th and Broadway as a city administration building, and is relandscaping the civic plaza in front of City Hall. Two farmers’ markets, an ice-skating rink, and an acclaimed museum help add flavor. Oakland’s Chinatown, located just southwest of the civic center, has developed into one of the region’s most dynamic downtown residential communities. And a campaign to bring housing to Old Oakland, such as in the historic Swan’s Market (slated for a cohousing development), could provide additional round-the-clock presence downtown.

With a winning combination of accessibility, a well-preserved housing stock, and a strong commercial street, the Rockridge neighborhood of north Oakland was rediscovered in the late 1970s after construction of Highway 24 and the BART station was complete. The infusion of new businesses along College Avenue transformed this middle-class, pedestrian-oriented community into something a bit more vibrant, upscale, and region-serving. Yet the area is still diverse and neighborhood-oriented. Special zoning designed to maintain the area’s character was adopted in the 1970s to temper debate about the proper intensity of development and to help this stroller’s haven maintain its village-like character.
Raising Environmental Awareness in Bayview-Hunter’s Point

When a third power plant was proposed for San Francisco’s Bayview-Hunters Point neighborhood, community members sprang into action. With the help of Golden Gate Law Clinic members of the Southeast Alliance for Environmental Justice documented the disproportionate number of brownfield sites in this lower-income, predominantly African-American community.

The environmental justice activists found that Bayview-Hunters Point contained six times as many registered hazardous materials facilities as in the city overall, five times as many acutely hazardous materials released, and three times as many underground storage tanks. The Hunters Point Naval Shipyard is also one of the nation’s most toxic Superfund sites. The neighborhood appears to have twice as many incidents of cervical and breast cancer as elsewhere in the Bay Area. Raising awareness of such environmental justice issues helps ensure than no Bay Area community is used as a toxic dumping ground in the future.

Since the early 1970s, Palo Alto’s extensive network of bikeways has been an important part of the City’s vision of making local transportation less automobile-dependent. A centerpiece of this network is a three-mile-long “bike boulevard” which runs the length of the city. Several vehicle filters on this street eliminated automobile through-traffic while allowing bikes to pass through. A 1983 Palo Alto ordinance also requires that secure bicycle parking and showers for employees be included in new buildings larger than a certain size. In collaboration with bicycle advocacy groups, the City is now planning for a new commuter path within the Caltrain right-of-way. This path is designed to facilitate access to the city’s downtown, high school, and train station.
Treating Wastewater Naturally in St. Helena

An innovative sewage treatment facility has saved millions of dollars for the city of St. Helena since its construction in 1966. Using a technology known as the “Advanced Integrated Wastewater Pond System,” the facility achieves federal and state clean water standards for treating up to 500,000 gallons of sewage a day.

The wastewater flows through a series of scientifically-designed ponds that use biological processes to break down pollutants in the waste stream. This process uses much less energy and mechanical equipment than traditional sewage treatment, and requires less personnel for staffing. Because the process is carried out in earthwork reactors, construction costs are significantly lower. The system operates odor-free and in 30 years of continuous operation, the system has needed no special maintenance.

With its narrow, tree-lined streets, mix of housing types, average density of 12 units to the acre, pedestrian-accessible shopping and jobs, and views to Mount Tamalpais, the historic Montecito neighborhood in San Rafael is a charming and relatively sustainable Bay Area community. Its residents recognized these qualities as resources and set out to protect and enhance them during a 1995 neighborhood planning process. But controversy developed.

Neighbors wanted a surplus school district lot to become a park. However, the city’s Redevelopment Agency was proposing senior housing — a city- and region-wide need. Instead of reaching a stalemate, as happens so often with NIMBY (“not-in-my-backyard”) controversies, the groups worked for a creative consensus solution that would satisfy both parties. In the resulting plan forty senior housing units will be built, with meeting rooms and an outdoor recreation area to be shared with the neighborhood. Montecito residents are now working on landscape projects at the site, and promote this collaborative experience to other San Rafael neighborhoods.

After extremely rapid growth in the 1970s and 80s, Walnut Creek is now moving to create a downtown oriented towards pedestrian and transit. Plans call for adding more pedestrian-scale retail near the BART station. The city’s Growth Limitation Plan coupled with the recent East Mount Diablo Boulevard Specific Plan call for redevelopment of infill sites to promote a 24-hour shopping and entertainment center.

The city is also moving to restore nature. Its Creek Restoration and Trails Master Plan encourages urban development which takes advantage of creekside locations to provide amenities such as dining patios and public walkways. Initial efforts to restore Walnut Creek through the city’s downtown began in 1996 in a section of Civic Park.
Saving Energy and Money with PG&E

The Bay Area, like the rest of the country, over-consumes and wastes water, energy and other resources on both a personal and regional level. But PG&E’s Retrofit Express program is reducing the demand for electricity by offering rebates to all commercial, industrial and agricultural customers who retrofit with energy-efficient fixtures.

After conducting an audit PG&E pays up to $300,000 to replace lighting, air conditioning, motors and refrigeration appliances with more efficient counterparts and provides 100 percent equipment financing if needed. In 1995 the program saved enough electricity to power more than 40,000 homes. Mervyn’s department stores cut their energy expenses by 15 percent.

One of the Bay Area’s foremost needs is for affordable housing, and a growing array of nonprofit housing developers has emerged to help supply it. Raising funds from public and private sources, these persistent and entrepreneurial organizations built almost two-thirds of the multi-family housing developed in the Bay Area in the last decade. Eighty-six percent of this housing is for people with low and very low incomes, meeting 13 percent of the region’s needs.

Leading the pack is the BRIDGE Housing Corporation, a collaboration established in 1984 with a grant from the San Francisco Foundation. BRIDGE built more than 5,000 affordable housing units in the Bay Area in its first 12 years, and pioneered the philosophy that affordable housing should have the same designs and features as market-rate housing. By building well-designed and managed projects, BRIDGE has helped prove that affordable housing can be a community asset not a liability.

Creating a Secondary Materials Industry in the East Bay

The Oakland/Berkeley Recycling Market Development Zone is a collection of businesses using recovered materials to produce marketable, value-added products. One of 40 in California, this zone includes industrial areas in Berkeley’s “Green Valley,” West Oakland, the Port of Oakland, and the Oakland central business district. The three main goals of the zone are to create good products, to turn waste into production materials, and to create jobs.

In 2 1/2 years, almost 400,000 tons of material have been diverted from landfills, $95 million in value-added investment has occurred, and $4 million in loans have been awarded to participating businesses. Companies range from C&K Salvage, which reuses wood, MBA Polymers, which researches plastics recycling, Plastic Works, which builds plastic display racks from recycled plastic, to Cyclamen Studio, a ceramics factory that uses non-toxic glazes and recycled pottery.

This industry is considered a rapidly evolving field with great growth potential in the Bay Area. At last count there were 1,200 companies employing 13,000 people.

The Real Cost of Free Parking

One of the reasons that the Bay Area has unsustainable, ever-growing automobile use is that the costs of driving and parking are artificially low. Costs are borne by the public at large or by institutions, not by individual drivers. “Free” parking is a case in point. The cost of providing automobile parking for employees at Stanford University is given in the table below. Costs for other Bay Area employers are similar.