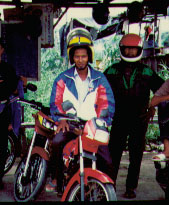 They gather at the foot of every lane, ready to buzz residents and workers from the corner bus stop to their home or workplace.

Bangkok’s motorcycle taxi drivers form a vital and affordable link in the city’s public transportation system. One or two baht buys a ride down a soi or lane. Sometimes two or even three small passengers squeeze on the seat behind the driver.

Daring commuters can negotiate a fare — always considerably cheaper than a taxi fare — for a ride virtually anywhere in the city. Longer trips can be a harrowing ride as the small motorcycle weaves through the city’s stagnant traffic, but it’s usually the quickest way to make it from one point to another and sometimes the only to make it to an appointment on time.

Environmentally, the motorcycle taxis are something of a mixed bag — they’re loud — imagine a motorized army of mosquitoes — but they get great gas mileage and superficially, at least, produce less pollution than the three-wheeled tuk tuks and older diesel busses. Besides, they add a bit of excitement to the daily commute.