Gang of Five: Leaders at the Center of the Conservative Crusade 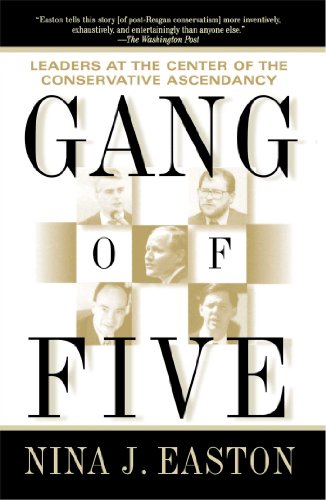 Reviewed by James B. Goodno

Right-wing activists and intellectuals descended on Washington, D.C., in the 1980s and 1990s with one overriding goal: to dismantle the Keynesian state erected during the Great Depression and strengthened in 1960s. While its members fell short of achieving their “revolution,” the Baby Boom right succeeded in radically altering the content of American politics, weakening the nation’s New Deal-Great Society programs and moving contested political ground to the right.

The foot soldiers in this crusade were, for the most part, residents of middle- and upper-income suburbs and small rural towns, but its impact was greatest in the cities. The introduction and legal defense of school voucher schemes, the attack on affirmative action, and the pursuit of conservative welfare reform, for example, resonated strongest in urban areas where public schools are troubled, people of color are concentrated, and welfare rolls are largest. Ultimately, the right’s successes had a deleterious impact on our cities, cosmetically repairing some problems — some kids do benefit from vouchers that allow them to attend private schools — while making real solutions more difficult-public schools, where most young Americans are educated, are still deeply troubled and now face competition for funds, teachers, and other resources.

Revolutionary — or reactionary — asolutism of some conservative leaders and the easy stereotyping of much of the media allowed the new new rightists to be caricatured. In turn, this allowed those of us who are critical of the right to treat our opposites too lightly. Journalist Nina Easton’s new book goes a long way toward correcting these false impressions. Anti-tax crusader Grover Norquist remains something of a cartoon character — that seems to be who he is — but Bill Kristol, Ralph Reed, David McIntosh, and Clint Bolick emerge as intelligent and complex political operatives and thinkers. In sports, they would be deemed worthy opponents of the best the left or the center can offer.