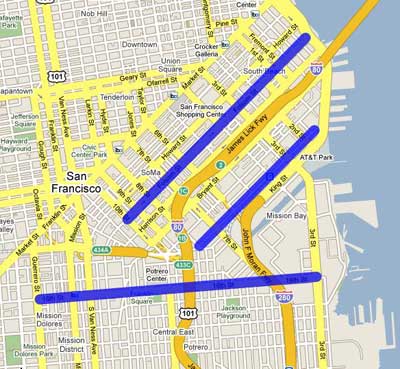 On Tuesday night, Urban Ecology hosted an EN TRIPS Community Task Force meeting in the SOMA. This Task Force will be a key information and communications conduit for organizing community input on the city’s Eastern Neighborhoods Transportation Implementation Planning Study. We had a handful of active community members present, as well as representatives from the Department of City Planning and MTA. Now that MTA is ready to begin the EN TRIPS process, this initial Task Force meeting was an opportunity to gather together to scope out how the Community Task Force, with Urban Ecology’s assistance, can have the most valuable and constructive effect.

Suzanne Chen-Harding who is the project manager for MTA, provided a review of the EN TRIPS process – an 18 to 24 month technical analysis project with the purpose of preparing various transportation improvements projects outlined in the Eastern Neighborhoods area plans for actual implementation. The MTA’s aim is to take those projects through technical vetting, feasibility analysis, design specifics and “environmental clearance” with the EN TRIPS process. The Board of Supervisors has already given direction to address three high priority projects:

While the Community Task Force will be able to guide the city in its detailed analysis of these three key projects, the community will also have the opportunity to identify and prioritize other transportation improvements to be addressed in the EN TRIPS study. The question about what will be the full scope of projects for the city’s EN TRIPS process was the major point of discussion at the Task Force meeting on Tuesday. Suzanne’s presentation noted a long list of “Other possible key projects types may include,” and MTA seems open to as broad a scope of projects as possible beyond the big three high priority items for the study. Though, she also cautioned that there “needs to be a level of managed expectations.” One strategy to be discussed would be to bundle together additional improvements projects that are related to the three big projects listed above. Alternatively the community could decide to prioritize some of the numerous other identified potential improvements projects more broadly within the Eastern Neighborhoods area that may not get addressed other than through the EN TRIPS process. Yet another approach would be “opportunistic” by focusing on improvements projects in the geographic context of development activity, thus leveraging both public and private investments to implement transportation improvements. The Task Force asked if the Planning Department can provide information on the pipeline of development projects in the EN TRIPS study area, so that the priority for transportation improvements can also be considered relative to impending development. Jon Swae of Planning said the department should be able to fulfill that request.

Discussing, debating and advocating for the “right” scope of projects to be analyzed in the EN TRIPS study is a first essential step in this process, and we expect that the Community Task Force will be a central venue for those discussions. These choices require the knowledge of the people who know these neighborhoods the best, and are the perfect example of why community input is integral to forming a more livable city. As part of our independent “community facilitator” role in the EN TRIPS process, Urban Ecology is creating several tools that will assist the community and the city agencies in making these hard choices:

We are collecting information on all the potential projects described in the Eastern Neighborhood Area Plans as well as in other concurrent processes – the W. Soma Plan, the Mission Streetscape, the TEP, etc. This list is still being built in collaboration with MTA, Planning Dept and the city’s consultant Nelson/Nygaard and will be distributed as soon as we polish it up. Our hope is to also map out all those projects (there are literally dozens) to create a clear “picture” of potential transportation improvements on the horizon. We believe this list will be a first opportunity for both the community and the city to look at the big picture net effect of these concurrent projects.
We are compiling an annotated library/bibliography of all the studies and plans either active, recently completed or to be undertaken within the Eastern Neighborhoods. Again there are literally dozens, including some esoteric works such as the Mission Bay Shuttle Study and the TA’s On Street Parking study and the Caltrain Bike Master Plan. We believe the collective information and findings from all of these reports can be highly informative for the community in understanding “who is doing what” when it comes to transportation decision making in these neighborhoods and how the EN TRIPS process connects with other plans and processes.

The Task Force suggested that we hold a community workshop in August to talk about all the projects, studies, and the issues and opportunities that the residents of the districts within the Eastern Neighborhoods know about in order to begin making recommendations to MTA on the scope of projects to include in the EN TRIPS study. We will outreach widely for people to attend the workshop. Activities we do at that Task Force workshop will also be available to the community through the online mapping tools Urban Ecology has created to facilitate input opportunities on EN TRIPS. We will be giving full tutorials on these mapping tools at the workshop and on an as-requested basis.

Look for more information on the August workshop and other updates on the city’s EN TRIPS process soon.