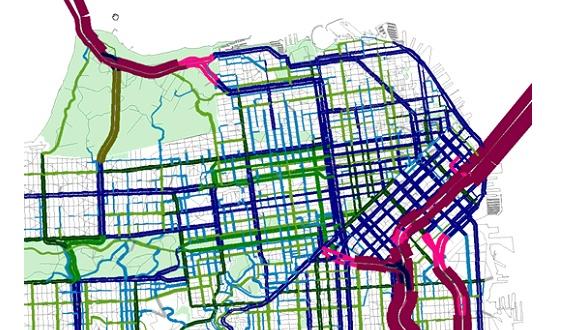 On July 22nd we had a mini EN TRIPS Community Task Force meeting at SFMTA‘s office to specifically discuss the transportation planning computer models they use. Five members of the community task force were able to attend as well as the Transportation Authority’s (SFCTA‘s) transportation modeling experts. The conversation included an overview of all the elements of the modeling planned for the EN TRIPS project, the assumptions and variables incorporated into these future projections, how to best add a participatory aspect to the modeling process for the Task Force, and the importance being ambitious when planning for the future.

The city staff explained that computer modeling for transportation has been in use since the highways went up in the 50′s, though it wasn’t until this past decade that transit and bicycling have been added to models. San Francisco was one of the first cities to do so. Today the SFCTA uses a handmade regional transportation planning model called SF-CHAMP. A brochure explaining this model is available on our Documents page. This computer model pulls in many kinds of data from many sources, such as demographics from the Census or ridership counts from MUNI. They take all that data and are able to model how people travel to and from and around San Francisco.

They begin by calibrating the model against current conditions to ensure that they have a correct baseline. When the model is tuned up and the technicians are happy with the accuracy, the planners at SFCTA begin to make a series of educated guesses about certain variables that each affect the model. These numerous assumptions, from future gas prices to number of future bike lanes, change the outcome of the model and influence the decisions that the planners make. These assumptions are based on research and data, household surveys, and many other sources. Though debated and tweaked by transportation engineers, several of the Community Task Force members felt it important that the selection of these assumptions be made transparent.

With the list of assumptions known, the community can then help the City choose the correct arrangement of assumptions and “turn the dials” to create a range of scenarios most reflective of collective vision. This selection of scenarios will give community members some ownership of the process, which is vital when tinkering with something as important to people as their future transportation options. It was highlighted in this discussion that the community members involved in the EN TRIPS Task Force have a breadth of local knowledge and practical experience far beyond transportation planning which is extremely useful when making assumptions about the future. MTA staff assures us that the first goal of transportation planning is to “do no harm,” and letting people in on the modeling process reduces that risk. And it was acknowledged that allowing community members to assume some of this responsibility will also increase the political support at the end of the planning process when real transportation improvement projects are on the line. As a footnote to this, Urban Ecology’s role in the EN TRIPS process is as an advocate for a participatory planning process which is a fundamental aspect of all of UE’s work, and we have been attempting to have the community-engaged EN TRIPS process be a model for city agencies to follow. Vetting these internal modeling assumptions with the Community Task Force is part of achieving that goal. The first model that the SFMTA/SFCTA team will create will be of current conditions plus growth projections with little or no transportation infrastructure into the future. What would the Eastern Neighborhoods look like in 2015 and 2035 with no improvements? A constant gridlock of limos and shuttles? The modeling scenarios will then be built by layering potential improvements, projects, and other assumptions on top.. It was agreed that a series of five+- scenarios would help provide a variety of potential future conditions to be analyzed in the modeling.

The Importance of Being Ambitious

The scale of these potential projects is important though. On the smallest scale we have a technical limit as the SF-CHAMP model can only take inputs of a certain discreet size. On the upper end, SFCTA plays the role of safeguarding the modeling process from being rendered useless because of infeasible ideas. It was pointed out that the job of the Community Task Force will be to make sure the planners are being ambitious. The highway revolts of the 60′s seemed crazy back then, yet they succeeded. The point was raised in the meeting that the land use plans that ENTRIPS is reacting to, namely the Eastern Neighborhoods Plans (and by extension the forward-looking Transbay Terminal planning, Rincon Hill and Market/Octavia plans), are very ambitious plans. We must be visionary and ambitious if we are to create the future city those land use plans aspire to.

The Community Task Force will reconvene with the MTA agencies team in early September to work on crafting the scenarios for the transportation modeling.