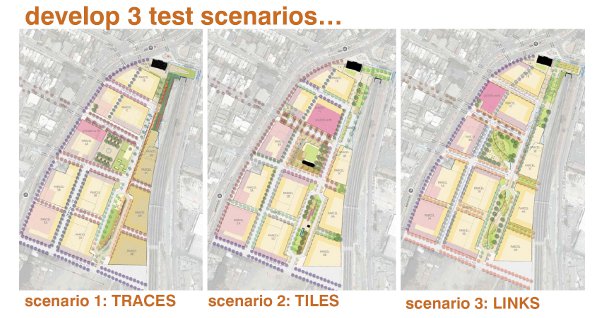 From 1999 to 2002, Urban Ecology partnered with the Visitacion Valley Planning Alliance in conjunction with Board of Supervisors Sophie Maxwell’s Office and EDAW to develop a community based concept plan for the unused Schlage Lock site in Visitacion Valley. This plan served as the local communities vision for the land when the site was declared a Redevelopment Area by the city the following year.

Home Depot was planning to open a new store on an un-remediated brownfield site in Visitacion Valley, yet there was a loud call for resistance swelling within the neighborhood. The residents were worried that big box retail would endanger the financial health of the competing, smaller local owned business in Visitacion Valley. They also warned of the environmental contamination of this fragile watershed area by the previous industrial use; the community wanted to be sure that the site would be properly remediated and they felt that Home Depot would not want to pay the full price of cleaning the land. Local urban planning advocates also warned that allowing a store with gigantic parking lots would endanger the potential of TOD being built at this important transportation hub.

In January 2000 Urban Ecology, using its own grant funding, worked with local community members to envision alternatives to the Home Depot development. Due to our extensive community outreach process, Supervisor Sophie Maxwell’s Office asked us to lead a fuller planning process for Schlage Lock in Spring 2001. Urban Ecology, EDAW, and other partners engaged the concerned community members through a series of design workshops. Out of these charettes we developed a Neighborhood Center Plan, envisioning the site as a mixed use addition to the neighborhood that added parks, commercial, and housing. This plan evolved into the Strategic Concept Plan and heavily influenced the recently approved Visitacion Valley / Schlage Lock Master Plan.

The Schlage Lock brown field is almost done with remediation and the community vision which Urban Ecology helped develop is being built. Universal Paragon Corporation has acquired the majority of the property and will be developing it based upon the Design for Development guidelines set by the community and the Redevelopment Agency. Within this development will be a series of parks and open spaces. The planning for these is happening right now. Recently, Urban Ecology was hired to help with the community engagement process, making sure that people attend the design charettes for the open space planning effort.

We just had the second workshop last weekend. Embedded below is the full presentation from the workshop. AECOM and the design team aggregated all the information from the initial workshop and created three alternatives. We had about 50 neighborhood residents give their feedback on the alternative designs and then drew their preferred version at the end. We hope this will give the design team a clear idea of what the community wants for these new parks being built in their neighborhood.

More information can be found at http://renewvisvalley.com